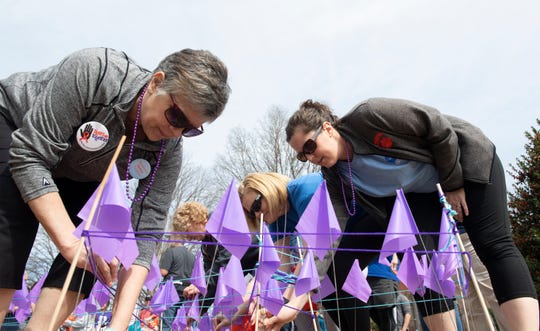 “We should be calling it ‘physical distancing,’ not ‘social distancing,'” said Bill Lindsey, the executive director of National Alliance on Mental Illness South Carolina. “We still need that social connection, whatever that may be. One of the things with mental illness is that people tend to isolate anyway. We’re really wanting to keep people connected as much as possible.”

At a time of drastic changes to social routines, and mental health support groups switching to virtual meetings, some crisis helplines have seen recent spikes in calls. Suicides in the Upstate haven’t changed, but concerns remain among mental health advocates while the coronavirus pandemic lingers.

The federal Disaster Distress Helpline saw a 338% increase in call volumes in March compared to February. And compared to March 2019, this year’s March had an 891% increase in calls, said Christopher Garrett, a spokesperson for the Substance Abuse and Mental Health Services Administration.

The crisis line for Mental Health America of Greenville County has seen a “significant” uptick in calls, according to NAMI Greenville executive director Ken Dority, though the exact numbers were not available as of Tuesday.

Dority said at least 80% of calls to the crisis line are now related to anxiety over the coronavirus, whether that be tied to the economy, employment or the virus itself.

“I think that speaks huge volumes to where we are with this COVID-19 and you can throw in the political environment of the country and there’s just so much that is affecting the mental health of folks especially those that are suffering from mental illness,” Dority said.

An informational sheet on COVID-19 is displayed next to a spray bottle of disinfectant at Freedom House Monday, March 23, 2020, (Photo: JOSH MORGAN/Staff)
The NAMI HelpLine has seen a 40% increase in calls and emails in the past two weeks and most people mention Covid-19, Dawn Brown, NAMI’s director of community engagement, said in an email to The Greenville News.

NAMI released a COVID-19 resource and information guide to help people with mental illnesses understand what steps they can take if they’re feeling anxiety and stress from the pandemic.

While promoting the use of crisis hotlines for avenues of support, physical support group meetings have switched to gathering virtually through video conferencing platforms like Zoom.
“As we’re muddling through this, the times are quite anxious for everyone regardless of if you have a mental illness or not but it’s more so if you have a mental illness, particularly if you’re having to isolate,” Lindsey said.
The coronavirus is causing major stresses in households. Here’s a look at how the country is doing and tips on how to cope with mental health issues. USA TODAY

Actual suicides in several Upstate counties are largely the same compared to months when COVID-19 wasn’t a concern.

Suicidal-related calls to law enforcement are also largely unchanged between now and the beginning of the year, according to data obtained from the Greenville County Sheriff’s Office. The highest amount of suicidal calls so far this year was in the first week of March when there were 42 calls. The average weekly calls have been 33 calls per week in Greenville County. There were 32 calls last week, according to the data.

Lt. Ryan Flood said the Sheriff’s Office routinely sees frequent suicide threat calls, but the calls are mostly just that: threats. He said most of the time, 911 callers are just looking to speak with someone.

Suicides are complex death cases to draw conclusions from since underlying factors could run the gamut.

“It’s too early to see if there’s a correlation between what we’re going through with coronavirus and an increase in suicides. Typically, there’s no real hard data to show there’s an increase in suicidality,” Dr. James Lee, adult psychiatrist at Havenwood Behavioral Health in Greenville. “When dealing with suicide, we can’t do a blood test to say they died from a suicide based on COVID-19.”

Mike Rowley, the CEO of Havenwood, said for those struggling with a mental illness during the pandemic, it’s better to communicate a feeling of despair early on.

“If you’re feeling that anxiety and stress and you’re having mental health issues, don’t wait to reach out to someone.” he said.

Rowley, among other mental health advocates, stress the urgency for the general public to reach out to their neighbors and family members during times of uncertainty so that they have personal support woven into their lives.

“You can hit a certain point with depression where you’re not going to make those phone calls. It’s going to be up to the rest of us to reach out to those people,” Rowley said. “A lot of times you have to intervene for people. We can all kind of get locked into our houses, but we should continue to communication with family and neighbors. Community doesn’t consist of your four walls.”